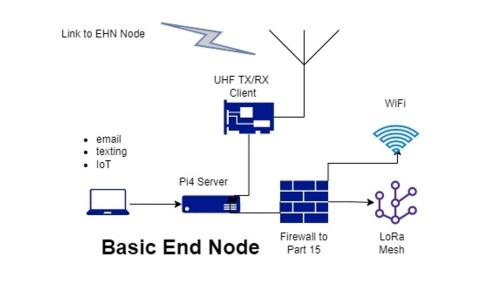 The term "Peoples Network" has been used by some new players in the emerging private network infrastructure termed low-power wide-area networks (LPWAN) or the older term low power wide Area (LPWA). These have re-emerged as a growth segment because of the development of the IoT and changes in incumbent cellular networks. LPWA is not new, in 2013 it became a fully defined thing in the GSM industry who offered low data rate low-cost connectivity within their network. LORA formed to offer LPWA using a completely different technology, in turn several low data rate standards have become players in this growth market. Now in 2022 there are many competing companies trying to establish themselves as major players in this segment.

What does LPWAN Offer:

The three most quoted benefits of LPWAN are:

The combination of long range combined with a star topology reduce expensive infrastructure requirements, and the use of license-free or licensed bands reduce network costs. These features justify calling it "the people's network".

The technology is optimized for low-end low cost IoT applications which transmit infrequently using small bursts of data. They can support large numbers of devices, often spread over wide areas, and devices that need to operate autonomously for many years.

When trying to quantify the size of the market I kept seeing this quote: "According to Global Market Insights, the global LPWAN market is set to surpass $65 billion by 2025". If this is a reasonable estimate then this is a big deal, most of us will be affected by its adoption and will probably use it to monitor or control something in our lives.

What does any of this have to do with Amateur Radio:

All the current LPWAN deployments I have studied require connectivity to the Internet or Private Networks such as cellular. The available public frequency bands and power levels limit the coverage and so a separate network is needed to link the islands and provide central control.

As licensed operators we have the transmit power and multiple frequency options to be able to link almost any two places on the earth.Not all the IoT traffic will be commercial (remote meter billing or commercial monitoring), a good percentage will be hobbyists, students or clubs interested in developing new devices and solutions. In today's world they will have to pay or try to use some of the free LPWAN networks.What if there was a branch of the Amateur Radio movement who made it their job to link small LPWAN clusters and manage their traffic. Immediately we would tap into many new technologies and experimenters, including our young people. This could fuel the next generation of Radio Amateur's.

I have written some blogs on the available technologies that could provide point to point and meshed links between public systems. Historically Ham Radio helped make technological advances in communications, this seems to be happening less frequently but embracing the new communications systems and becoming relevant in the lives of the next generation could turn this around.

To understand the opportunities Radio Amateurs might have in the LPWAN it is helpful to study the major players and technologies in use. The current market seems to be split into four types of technology.

It seems that LoRa technology and systems offers the best opportunity for Radio Amateurs to help connect and innovate. In 2019 LoRa had about 36% of the global market which makes it a significant player. This is why the LoRa Mesh is shown on the basic nodes of the proposed EHN.

Winlink – Mature, Stable, Reliable, what next?