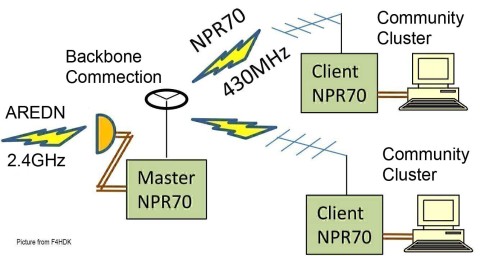 The NPR system would allow a single master station connected to a high-speed backbone, to serve up to seven clients through TDMA and achieve data rates of 65Kb/s on 70cm, economically priced this might be the solution for local clusters to be interconnected.

The NPR protocol was introduced in 2019 to send data via IPv4 up to 300 kilometers with easy-to-assemble hardware. It was developed by F4HDK and released under a Creative Commons License. The performance of the NPR protocol puts it midway between old packet radio (AX.25) and HSMM-Hamnet with Wifi equipment (AREDN). NPR is capable of usable data rates of between 70 to 500kbps. NPR is a digital protocol using either 2GFSK or 4GFSK (Gaussian frequency shift keying (GFSK). GFSK is a lowpass filtered waveform, so the transmitted RF spectrum falls off quicker at the band edges, it performs worse than FSK but the narrower and better shaped spectrum is specifically tailored to fit well inside UHF band plans.

Hardware is currently available for 420-450MHz only. It is legal to use in the US, but its capabilities need to be reduced to meet the 100KHz bandwidth license restriction. With the 100KHz restriction the NPR performance is stated as being: Symbol Rate 50kS/s, bandwidth 100kHz, raw data rate 100kb/s raw, usable data rate 65kb/s.

It gets better, the NPR is designed to operate as simplex channels controlled as a master / slave arrangement, more correctly this is known as Managed TDMA. The master can manage up to 7 clients who can join and leave in an ad-hoc manner. This means a single master that has a connection to a high speed backbone would be able to serve up to seven remote clients vie point to point 70cm links, all with bursts at a data rate of around 65Kb/s, sufficient for the Smart Phone messaging application and typical IoT's.

A couple of hardware options are currently available: An advanced version with a power amplifier designed for POE and mounting at the antenna, from Locolino at about $140 each. The original is also available from Elekitsorparts for around $100.

If a version was available for 33cm (920MHz) it would be able to use the full bandwidth of NPR giving data rates of up 500Kb/s.

goTenna – Mesh and Pro Products
LoRa – Could this Proprietary Standard Deliver the...