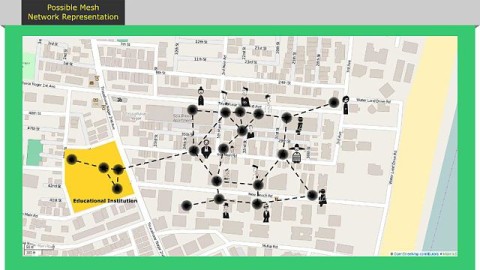 For radio packet network the use of a mesh network topology can provide longer range and tolerance to interference. Such systems are not commonly used in Ham Radio, AREDN is the notable exception. Low-cost commercial mesh systems have become popular for WIFi and the IoT. This technology could migrate into future emergency ham networks.

The DNA of modern mesh networks can be traced back to military systems developed in the 1970s. The Defense Advanced Research Projects Agency (DARPA) produced ARPANET, which is generally recognized as leading to the formation of our current Internet. ARPANET used a Packet Radio system known as PRNET. It was slow, bulky, and lacked the reliability needed for the military. Originally, they used half duplex radios controlled in groups often with backhaul. Their packet switching rules evolved into strategies that would re-rout packets if a critical part of the deployment failed. As the capabilities of the radios improved so did the rules eventually leading to the now familiar term such as mesh, routers, and gateways.

It took almost 30 years of research before radio-based Mesh Networks found uses in general communications. The breakthroughs were in understanding the interaction of different wireless routing protocols and how to optimize capacity for a given mesh size, bandwidth, and throughput. There are various known methods backed up by research, results, and published papers. Perhaps the best-known open algorithm today is the BATMAN, the Better Approach To Mobile Ad Hoc Networks (Johnson, Ntlatlapa, & Aichele 2008) this is a proactive protocol for establishing multi-hop routes in mobile ad-hoc networks. Each node only maintains information about the best next hop towards all other nodes, which avoids unnecessary knowledge about the global topology and reduces the signaling overhead.

It seems many commercial systems use some proprietary form of routing protocol optimized for their specific system and scenario. They may use this to keep customers buying their brand or open interfaces so other systems can connect. With the growth of WiFi and the IoT there are many commercial mesh systems available, with names such as Zigbee, SigFox, LoRa, Google Thread/Open Thread, Bluetooth LE, WirePass Mesh, goTenna and NB-IoT to name a few. These are generally not interesting to Radio Amateurs because they are mostly turnkey solutions that include encryption. They all compete for customers in what is called "the last mile" adopted from the term your local telecommunications provider used to describe the connection to your home.

It is worth looking at the uses of these IoT standards and investigate if their markets could benefit from connecting to an Amateur Digital Network. But that is left to another blog.

There seem to be a just one popular Amateur Radio mesh system AREDN, and a lot of different commercial and hobbyist open designs, Meshtastic for LoRa and Open-Mesh being the most popular I could find interesting as a ham operator, but a Google search will identify many different projects. WinLink often comes up when discussing amateur radio digital networks or mesh topology. I believe that WinLink is not a digital network or mesh, it is a very successful store and forward packet e-mail system with many different transport options. It would be able to take advantage of any new digital networks, point to point or mesh.

Mesh networking has become popular for WiFi routers/home systems. These mainly proprietary systems are for networking traffic and work by allowing the WiFi clients to communicate to the internet through multiple paths so making it possible to move between nodes seamlessly. They also allow the nodes client traffic and backhaul traffic to pass between all nodes and back to the gateway. This eliminates the need to hardware each node back to the gateway and permits the mesh to reconfigure should a node fail. This is a different use case to the radio communications mesh which are optimized for passing massages through a multi-node add-hock network in the presence of interference and deliver messages to any node.

For Radio Amateurs AREDN is the only widely deployed mesh network. It seems to thrive in parts of the country that has been able to interconnect sufficient nodes to form a viable network and in isolated pockets of enthusiasts that have created small islands linked through the Internet. They have found a role in emergencies and for public events by offering portable easily deployable local networks but even with all their success they struggle to become more mainstream. As someone who has deployed AREDN nodes connected through the Internet I can understand the lack of interest. Apart from the joy in achieving the connection, there is little day to day use for the network. Perhaps the emergence of local mesh systems like Meshtastic or goTenna might provide a good source of traffic to energize ARDEN as might the ability to interconnect more islands to form a more comprehensive national network.