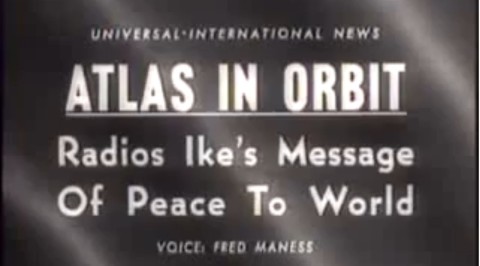 63 years separate the first voice message from a satellite to the almost total world coverage of the Internet from Starlink. Such technology is born from men like Elon Musk who believed in an idea and helped others follow. They did not accept the status quo; they disrupted the traditional wisdom.

The United States launched a unique communications satellite on top of a converted Atlas intercontinental missile on 18 December 1958 for the Christmas season. The 150-lb Signal Communication by Orbiting Relay (SCORE), initially was silent, but on the 13th orbit, the backup system (a tape recorder playing a pre-recorded tape) responded with the first voice beamed from space to Earth. President Eisenhower's now historic address to the world: Americas wish for peace on earth and goodwill towards men everywhere. Although it is widely reported the message could have been heard by anyone with a shortwave radio the technical descriptions describe a 132MHz signal transponder. Most Americans heard the message as it was rebroadcast on commercial news programs.

A total of 78 messages, both live and recorded, were sent between the ground stations by SCORE over the course of its mission. Then a mere 12 days after its launch, with its batteries drained, the satellite fell silent. Finally, on January 21, 1959, it re-entered the atmosphere, burning up in the process.

Now at the end of 2021 we have Starlink, a constellation of low earth orbit satellites. These 570lb satellites now number over 1500 and provide near global high speed Internet service on the E-Band (2-3GHz). The final roll out is expected to number 30,000 individual satellites creating a mesh network in space using inter-satellite microwave even laser links. Starlink is now serving about 140,000 users across 20 countries. Users can expect to see data speeds vary from 50 to 150 megabits per second and latency from 20 to 40 milliseconds in most locations

I am humbled to have lived through that 63-year period where technology and innovation took broadcasting from space away from being only for the President of the United States, to being available to everybody on the planet. I can only hope that his message, presumably now peace and goodwill to all men, women and all the rest, will ultimately come true. Or perhaps it can be peace and goodwill to humanity and our earth.