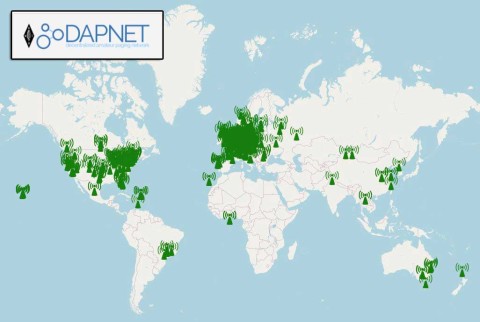 DAPNET is a mature once popular Paging system that has evolved into a resilient network suitable for short messages. It would be an ideal candidate for the Emergency Ham Network which could offer redundancy with the Internet for operation in times of local or national emergency.

I believe this project grow out of Germany from FunkrufMaster or CallMaster that seems to have started in 2008. In early 2008 DH4DAI reported on his website references to an early Radio Call and then his implementation of a pager system over his local German repeater system. By early 2016 this spawned the website hampager.de and DAPNET which had grown worldwide with thousands of users.

Based on the POCSAG protocol, also called Radio-paging code No. 1, this system adopted this common commercial paging protocol for communications to and from the pagers. This allows for using existing pagers provided they can be tuned to the Amateur frequencies. The custom written master control software is now a well-supported program widely available with connections (mainly through the internet) worldwide. At the time this was written they reported 4k users.

In Europe, particularly Germany, the digital microwave network HAMNET is connected to the control servers linking many of the pager transmitters. This creates a redundant system; most transmitters are still able to send radio calls even in the event of a disaster situation such as a nationwide power failure. In the US there only seems to be multiple transmitters connected through the Internet so no service would be possible during a serios emergency.

The DAPNET core software uses REST to interface many different devices including PC computers, Smart Devices, Smart Phones and of course Pagers. The resulting infrastructure is ideal for short message transmission and resilience.There is a fully documented collection of software on GitHub.