Autopatch or Phonepatch Matures into the Biggest EHN Customer Base? 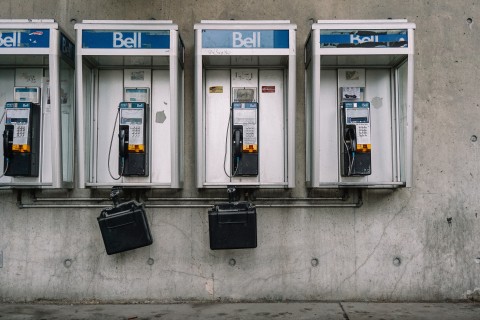 Photo by Maarten Van-den-Heuvel
Back in the day, more precisely the 1960's Amateur Radio Operators provided a valuable service during the Vietnam war. By coupling the local phone system to their transceivers Hams were able to allow American soldiers "free" phone calls home. Usually, you needed the help of an operator in your own state as interstate trunk calls were expensive, but since local calls were typically free, this service flourished. It was not only during times of war that this service was used or permitted. It was common right up to the time when the POTS changed and free state calling became the norm.
The Amateur license permits third parties to talk, today this is often used to let people talk over the radio at events or for friends. But that privilege extends to those connected to the telephone network. Our license also permits autonomous operation for digital and RTTY transmissions.

Does this mean that we would be able to connect a cell phone and link them for third party communications, a step further, could we link cell phones and let text messages pass to and from an Emergency Ham network? If so, we have a potentially huge customer base in an emergency. We might assume that the Emergency Services are well cared for in a disaster, but the general population? Who will pass messages from loved ones, those in need of medical supplies or just find out who is safe? Radio Operators that have the means to pass text messages direct from peoples cell phones using an approved app (voice may require too much bandwidth) would surely become invaluable and provide a service that I do not believe can be met any other way.

Do you believe we could ever pass such traffic? Share your Ideas and comments below.

Making the Emergency Ham Network FUN!
The ARRL National Traffic System (NTS) is not like...