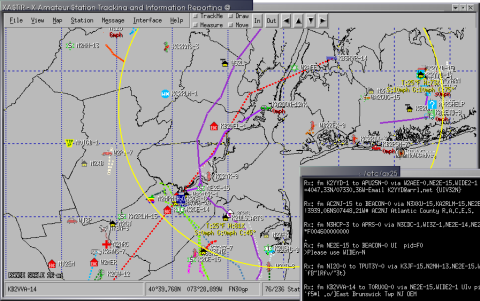 APRS would be an ideal candidate to travel over a new digital network which has the potential to offer higher bandwidth and connectivity. Connection to the EHN would likely be through some form of IGate and supporting network so that local APRS data can be forwarded to other local clusters without needing the Internet.

APRS now known as Automatic Packet Reporting System is almost 25 years old, dating back to 1998. It is a fantastic achievement for its creator Bob Bruninga, WB4APR who's callsign inspired its name. It is a fully functional packet-based system who's transport layer has been adapted to use many different radio systems and the internet. It has been interfaced to many different message systems, GPS coordinates, text messages, weather information and more. It is also a key element of many local Emergency plans and widely used by the amateur radio community.

My speculation on the formation Emergency Ham Net is often trivialized by suggestion it already exists as APRS. This is not the case. I am suggesting the formation of a digital network across America, this would be a general transport layer for all eligible message protocols. APRS is an unconventional packet-based message system that is specified down to layer 2, symbol layer, the Layer 1 or bit layer relies on transport infrastructure such as radio or public data technologies.

Much of the functionality of APRS would offer a good starting point for the format and scope for data on the Emergency Ham Network. APRS has already demonstrated it versatility being able to pass slow scan TV, voice and use satellites for transport. However, APRS is bounded by its AX.25 protocol, this limits address space, error correction and compression. Additional it is not clear to me how messages can be delivered between IGates other than static routing and both parties being on-line.